We're proud to announce that we have just released yet another new commercial app into the iTunes App Store.

The app is called "Coachbuddy" and Creative Intersection have partnered with its original creators (developed for Microsoft Windows a few years ago) to create an iPad version featuring the most highly sought-after features of the original. 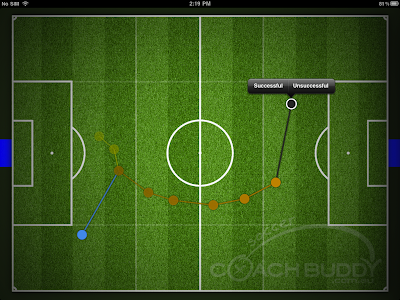 Using Coachbuddy, a parent (or anyone for that matter) can track a player's movements around the field during a soccer game, including the player's interaction with the ball ... and at the end can review a comprehensive set of statistics to help understand performance and fitness etc.

An unlimited number of games can be stored and retrieved.

The free version is a "taster" and limited to 5 minutes of play at a time.

Click here to view the app in the Apple iTunes App Store.
Posted by Brisbane App Development at 12:03 PM

Creative Intersection is an application development business based in Brisbane (Australia).

We provide a full range of website and application design, development, and hosting solutions for individuals, small business, corporate and government clients from all over Australia and around the world.